A new book by Andrew Lambirth 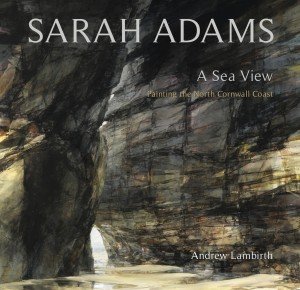 Growing up in landlocked Berkshire my early experiences of the seaside were on family holidays, and that first glimpse of the sea after an interminable car journey was always something miraculous. On the beach a magical world of pristine sand, pebbles and shells, pools and streams awaited us. It was never static. You could build a sand castle and see the tide trickle into the moat before going back for tea, exhausted. The next morning we would return to find the beach refreshed, and the adventure began again. A move to the Channel Isles in my early teens made the sea a constant presence, and as a landscape painter it has come to dominate my work as well.

My father was a master builder. I still have his drawing board and some of his wood working tools, and I probably inherited his love of construction, too. As a child I emulated him by endlessly drawing plans for houses or making camps in the woods, but architecture also featured heavily in my college work, particularly the shapes and textures of buildings in a state of decay. I began to travel about in search of subjects, and London provided them. Just beyond the Woolwich ferry terminal on the north side of the Thames there were several acres of brown field wilderness, punctuated by the remnants of industrial buildings, a no-mans-land of vaguely threatening space and silence. These structures had a drama and romance about them and as an art student I went draw there at weekends. On one occasion I was sketching, perched on a folding stool in the middle of a wide cinder track, when a chapter of bikers came roaring toward me. They circled a few times, and then pulled up, dismounted and strode over. As I sat there, thoroughly intimidated, the scariest one of all spoke: “Do you mind if I have a look at your drawing? I like to do a bit of painting in my spare time.” Working on site has its hazards.

The sea caves of Cornwall occupy a very different sort of wilderness, but they are no less intimidating. They are also architectural, a rugged Atlantis rising from beneath the waves. Piranesi might have felt quite at home on this coast, where crumbling triumphal arches and vaulted ceilings seem to mimic the romantic ruins of classical antiquity. Twists and spirals are set against sheer walls of stone all in glorious ragged decay, and thrift and sea campion grow wherever they can.

Each section has a particular character, dictated by localised formations and geology. Viewed through the grey arches of Porthmissen, a series of strata known as Marble Cliff loom up and catch the light; a pocket of limestone tipped upside down and weathered, the ledges are now home to nesting fulmars. Less than a mile away, Elephant Hole is completely different. Boulders of quartz have gradually worn it smooth, and the rock varies from green ochre through cool mid-grey to an improbable reddish purple. From Stepper Point to St. Ives the cliffs are generally variants of the Cornish ‘killas’, a series of slates, grits and mudstones laid down in shallow seas in the Devonian period. Volcanic activity has also left its mark and they are often shot through with mineral deposits. They have endured 400 million years of intense pressure, leaving them compressed, inverted, buckled and shattered.

Carnewas Island is part of a short coastal outcrop of the Staddon Grit formation, in which the mudstones are interleaved with tougher sandstones. If you walk through the tunnel that runs beneath it on a low spring tide, the next promontory also has a cave cut through. About the size of an old cinema, the entrance and interior are framed by monumental, pearlescent silicates, stained red and yellow by oxides leached from the rocks above. I have nicknamed it the Carnewas Odeon, but it is far grander than your average flea pit. Nearby Bedruthan was mined for tin, copper and lead in the 18th and 19th centuries, as was much of this county. A few miles further south, the cliffs above Chapel Porth are dominated by the remnants of Wheal Coates Tin Mine. The adits beneath it can also be reached from the beach at low tide, via a sea cave. At first it opens up, quiet and calm, lit from high above by a second opening. Go deeper still and you are walking on a stream bed, the cave walls narrow to within an arm span and the rushing water becomes deafening. Just past Land’s End the landscape is completely different. The whole peninsula is composed of granite, and Nanjizal glows orange-pink, richly patterned with huge feldspar crystals and again, rich in mineral deposits of tourmaline and cassiterite. Vertical fault lines have weakened the rock sufficiently for the sea to carve a corridor through the cliff. ‘Song of the Sea’ cave is a gothic cathedral, the aisle a cobalt turquoise pool.

Sometimes the rocks seem to tremble as waves pound the cliffs nearby. These spaces are no safe haven, merely borrowed while the tide is out. There is a sense of trespass. There may be a deep pool to negotiate, so a wet suit has been added to my standard kit and even in high summer layers of thermals are vital in order to sit in a cave for a few hours. Then there’s the light. Daylight is a extraordinary thing. In a pure white room you will see the light play on each surface, picking out edges and exploring the space with infinite tonal gradations, warm and cool shadows. There is gloom enough in a cave for any romantic poet, but as your eyes become accustomed to it you begin to make out the surfaces and structure. You become aware of colours too, as mysteriously the light creeps in.

Once decisions about precisely where to sit, what to include, scale, composition, and choice of support are out of the way, there begins a race against time. Naturally, the tides are a major consideration. If the way back is on foot, precisely how long it will remain clear is one of the first calculations. Making colour studies of something that is subject to constant change is exciting; shadows and reflections are in perpetual motion and water levels rise or fall. The light may alter radically, minute-to-minute, and each sketch seeks to take down something of this, incrementally recording the day, the place and the weather.

It is a universally acknowledged fact that however much the work done on site is reviewed, the result can only ever truly be evaluated once it is back in the studio. Often the journey home is a resigned trudge. Conversely, the thrill of transferring drawings to the studio wall that seem to have something about them, even a life of their own, never leaves me. A successful sketch can light up the room; that morning it didn’t exist, could not have been imagined, and now there it is, added into the mix. I prefer my workspace to be lively, full of images: drawings, studies, small paintings and large works in progress.

There is a long tradition of working in this way. In the early 1800’s, when the Napoleonic Wars had ceased and travel became possible, many Northern European artists gravitated to Italy and followed a practice of making small observational works out in the countryside around Rome. They filled sketchbooks with pencil drawings, almost using a linear shorthand to record the landscape. They made oil sketches also, to explore light and colour, all very portable, small enough to capture a fleeting subject quickly. This information gathering might be an end in itself or provide the information necessary to sustain a large studio painting. There is a cyclical rhythm to the process which seems natural and well balanced, in which rapid, intensive information gathering on a small scale generates a momentum for the larger, more ambitious projects. This activity was not confined to the South; artists everywhere began to work on site and subjects that had previously been neglected became central to new movements in painting. The early landscape tradition fulfilled its purpose in a topographical and educational sense, but it also romanticised the countryside, elevating it in our imagination. Our forebears might pick up pictorial souvenirs on the Grand Tour or be inspired to visit beauty spots back home by flicking through a portfolio of Turner’s engravings of Devon and Cornwall, but the images were not just a call to travel. They inspired a new attitude toward the natural world, encouraging us to value and preserve it.

Playground, larder, treasure chest, refuse tip? Hard to gauge the limits of human intervention on the landscape, our occupancy and activities have such far reaching consequences. It is the unspoiled environment that attracts me, and as far as possible I seek out subjects that are formed by natural forces; their otherness complete within itself. The power of nature is intimidating. The wonder of it is humbling, breathtaking, miraculous. Yet in describing this world as an ‘Atlantis’ I am still guilty of imposing a human construct. It requires no such validation. If this is Atlantis it certainly belongs beneath the sea, and the chance to visit, however briefly, is a great privilege.